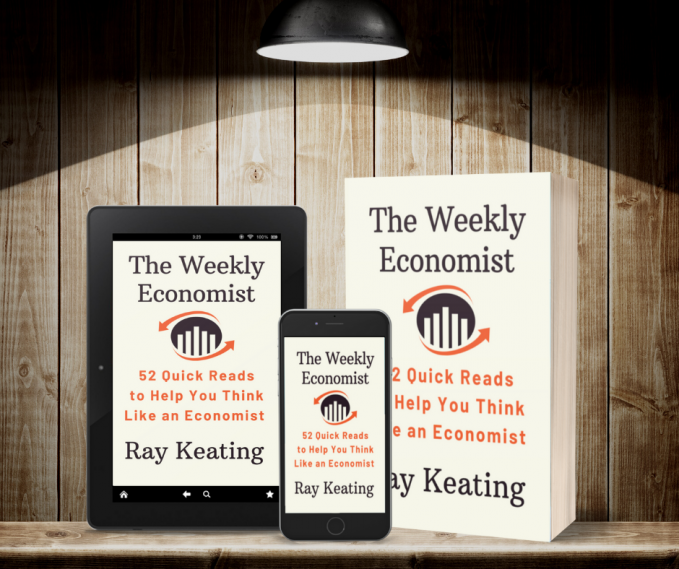 Ray Keating's New Book Offers Quick Reads on Wide-Ranging Topics and Questions Related to the Economy and Business
DAVENPORT, Fla. - JerseyDesk -- If you don't have a degree in economics, how do you figure out what actually makes economic sense and what doesn't? Ray Keating, a leading economist on small business and entrepreneurship, offers help with a new book titled The Weekly Economist: 52 Quick Reads to Help You Think Like an Economist.

Whether via CNBC, CNN, FOX, websites, or other outlets, many assertions regarding the economy and economic policy are presented that leave people wondering what's accurate and what's not. That's especially the case when declarations by one talking head are conflicted by the next one. The Weekly Economist offers quick reads on topics essential to thinking clearly on economics, or applying sound economic principles to hot topics.

Ray Keating notes, "Yes, economics and thinking more like an economist matter. It is my hope that individuals, by taking just a few minutes for a quick read each week, can clarify their thinking on economics, and thereby, improve their own lives, and the lives of family, friends, colleagues, neighbors, as well as people across the nation and around the world."

More on Jersey Desk
Beyond a general readership interested in the economy, The Weekly Economist is ideal for the classroom, boardroom and workplace.

The Weekly Economist complements Ray Keating's Free Trade Rocks: 10 Points on International Trade Everyone Should Know, which is an excellent economics introduction to the often controversial topic of free trade.

Paperbacks, hardcovers and the Kindle edition of The Weekly Economist are available at Amazon.com, and signed books at www.RayKeatingOnline.com.

Review copies, and author interviews and appearances are available upon request.

"Keating is at his best when tackling the issue that introduced him to the world of conservative thought: the benefits of the free market."  - Kirkus Reviews

Ray Keating's "take on the economy is unabashedly supply-side, offering a clear understanding that risk taking and entrepreneurship are the engines of economic growth." - Jack Kemp

"Keating manages to bring this seemingly dull subject to accessible life with real-world examples often torn straight from recent headlines, along with a comprehensive and (mostly) impartial view on the topic." – Self-Publishing Reviewon Free Trade Rocks!

"A common-sense explanation of why politicians and bureaucrats shouldn't throw sand in the gears of global trade." - Dan Mitchell, Chairman, Center for Freedom and Prosperity, on Free Trade Rocks!